The Music Shift: The Abattoir 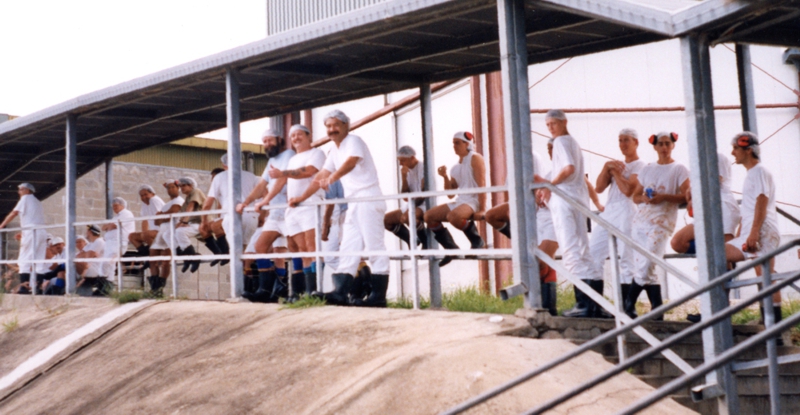 QMEAT was a government owned abattoir which has been operating for over ninety years. (Until 1947 it had been owned by a US company.) The workforce had a proud history of militant unionism, being members of the Australasian Meat Industry Employees Union.

The workers were facing redundancy as the government was in the process of selling off the abattoir. They told us that while they were accepting of change they didn't want it to be at their expense. 'If we have to go, we want to go with dignity' we were told. The history was given a human face when we met third generation workers at the site. This became the central image for our song 'On the Chain'

His grandfather’s ghost watches over him,
Summer days standing barefoot on the killing floor,
Skilled with a knife, rarely scored a hide,
Keeping the tally in sight,
Good times come,
Flesh on the bone,
Good times, good times

In his grandfather’s footsteps he followed,
From a boy to a man moving up the line,
Hard on the wrist working on the chain,
Keeping the boredom at bay,
Hard times come,
Cut to the bone,
Hard times, hard times

Did his grandfather’s ghost softly shudder,
Will the victories and losses fade in history,
Who pays the price, who’ll make the gain,
When his livelihood comes up for sale,
Strange times come,
Plans and chance collide,
Strange times, strange times.

Back
Categories
The Music Shift | Stories