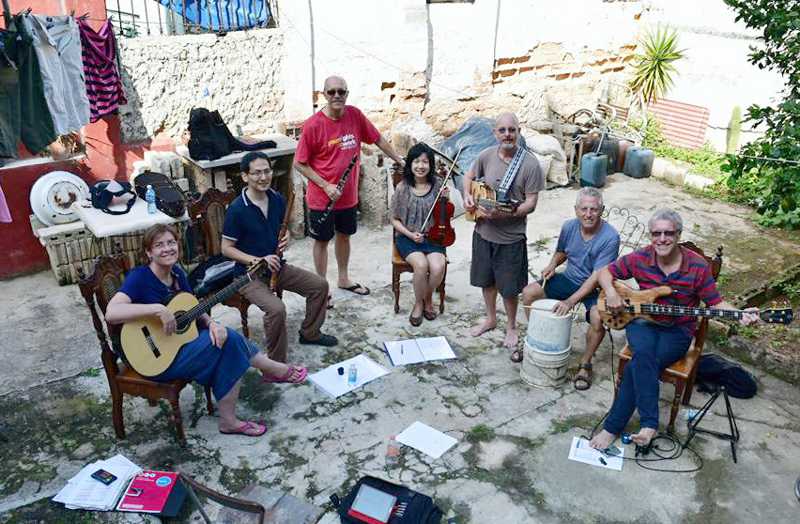 Our tour of Cuba has come to an end after twenty-four days of travelling, performing, attending concerts, and sight-seeing as well as catching up with musician friends and others who have made Cuba such a wonderful place to visit.

The tour was supported by the Cuban Institute of Music, the Cuban Institute of Friendship with the People, and Amistur who organised our programme, assisted with transport and organised venues, musical equipment, and publicity. We started at the Longina Festival in Santa Clara, then travelled to Santiago de Cuba by bus, for performances at the Iris Jazz club, the Esteban Salas Conservatorium and also to an adult English class where we had everyone singing to ‘The Quiet of the Winter Moon’. We also gave a press conference and were very happy to have TV, radio and newspaper interviews which came as a surprise. We then returned to Havana and played at the Julio Mella International Camp for the farewell to the Southern Cross Brigade and the following night we performed at the Fresas y Chocolate nightclub. A few days later we were invited guest performers of Mauricio Figuiral, at La Casa de ALBA, where people queued up down the street to get in - a very popular place so we were over the moon to get a spot there! We also had a meeting with the Network for the Defence of Humanity which connected us with like-minded artists.

Joining us in the band were Ross Gwyther, Rob Stewart, Koji Matsunobu, Khin Yee Lo and Dan Simpson. We also had great support and a wonderful travelling companion in Cheryl Simpson who was with us on the tour.

We finished up with a farewell party that we dubbed ‘Foco Nuevo in Havana’ which had informal performances by some great Cuban ‘trovadores’ (troubadours) Adrian Berazain, Mauricio Figuiral, Ariel Diaz, Silvio Alejandro, and Juan Carlos Perez, which reinforced our great love of contemporary Cuban trova.

We're very grateful to everyone who made the tour a success, and thankful to the Cuban public who gave us a very warm reception. We also gained new insights into the Cuban revolution through hours of discussion with friends about Cuba and its position in the world. Overall the trip was full of rich experiences which will hopefully find expression in our music in the near future.

Special thanks go to Eileen, Conchita, Arcia, Pereira, and Silvania (ICM), Alicia, Rafaela, Yexenia, Jorge (ICAP), Yani and Nene (Amistur), and to Pedro Monzon. We also want to thank Merita, Mery and Adanelio, Barby, Sergio and the wonderful Mendez family for their love, support and friendship.