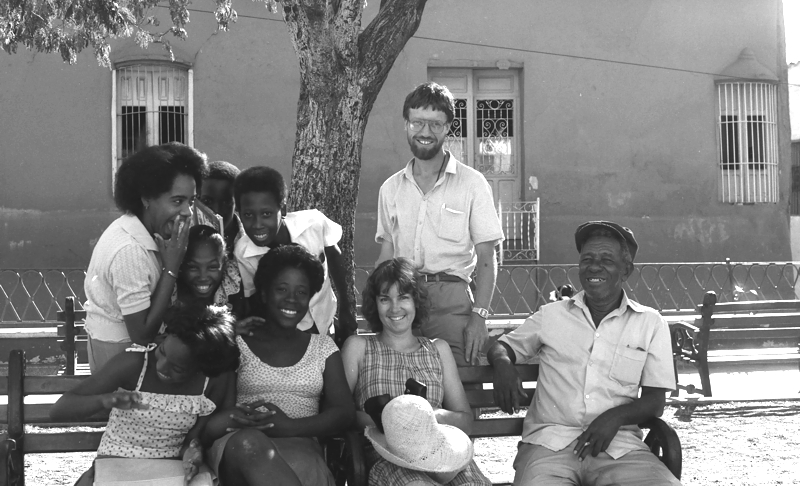 Our first visit to Cuba was over December 1985 and January 1986. It was the final leg of a tour throughout Latin America, seeing and studying as much music as we could in the major cities, Buenos Aires, Montevideo, Santiago, Rio de Janeiro, Salvador, La Paz, Cuzco, Lima and Managua. Our trip had taken us from Tierra de Fuego, along the fjords and volcanoes of Chile, visits to Mapuche communities in the south of Chile, crossing the Andes to Mendoza, through to Paraguay and Foz de Iguazu, through to the north of Brazil and up the Amazon River, crossing into Bolivia, Peru and flying to Nicaragua.

Our travels occurred during a time of upheaval in Latin America, the generals who failed Argentina were on trial, May Day in Montevideo brought a million people onto the streets making demands on the new civilian government, clandestine activity was growing in Chile in opposition to the state of siege imposed by Pinochet, civil conflict had broken out in Peru, with the military seeking out the Sendero Luminoso, and there was major conflict in Nicaragua, with the Sandinistas resisting the covert war being waged by the United States. Within this climate it was a great moment to visit Cuba and see how its revolution was dealing with problems that were destabilising so much of Latin America.

We visited many of the historic sites of the Revolution, went to the Latin American Film Festival, and saw some wonderful concerts which included performances by Pedro Luis Ferrer, Gerardo Alfonso, and Marta Campos. In Santiago de Cuba we met members of the choir Orfeon de Santiago, and spent many hours playing with trovadores in Calle Herida, after playing at a street concert to celebrate the 25th anniversary of the Cuban Institute of Friendship with the People (ICAP).